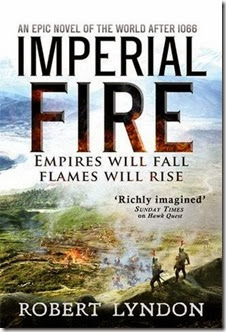 Lyndon’s biography lists him as a falconer, climber and traveller in remote places, so it’s not surprising that those experiences translated into fiction, give the book an air of authority, a certain verisimilitude.  Imperial Fire follows the continuing story of the characters that surfaced in Hawk Quest, though it’s not necessary to have read it to enjoy Imperial Fire, the novel stands very well on its own.

Vallon, commander of a group of Mercenaries called the Outlanders, is given command of the military component of a Byzantine delegation to the Chinese Empire ruled by the Song Dynasty. It’s a bit of a boys own adventure, featuring perilous environments, treacherous friends and polite enemies. If you like history and ancient military history, Lyndon brings that history to life.

The book’s greatest strength was the journey, the description of the places that the Outlanders pass through and the description of the chracters experiences.  The time period and that area of ancient history is fairly untouched in my own study and so I find what the story is about refreshing and interesting from a purely historical point of view.  That interest combined with competent action scenes keeps the book flowing.  The characterisation, and some of the interpersonal interaction felt a bit “off” at times…perhaps stilted is a better word for it.  It was enough to drop me out of my enjoyment at points.  This could be down simply to style or that Lyndon’s strength is in his creation of the environment.

There was also a tangential adventure taken by a secondary character (Waylander for those who have read book one) that I think broke the impetus of the main plot.  I would argue that the subplot, while interesting, should have had its own novel or have been better woven into a following tome. I say this because it takes up valuable space in the last bit of the novel and at 512 pages a felt the point of novel, the point of the story was truncated.  While I enjoyed the fairly long read I felt let down at the point at which the story finished. I’d have still read a follow up novel without a soft cliffhanger that we were handed.

Fans of Hawk Quest will no doubt enjoy returning to old characters, for those with a historical fiction bent, Imperial Fire covers a time and place that isn’t well ploughed by popular culture. If your a fan of epic fantasy its not quite as dark as Joe Abercrombie or Rowena Cory Daniells but it has its moments of gritty realism underpinned by a basis in real world history.