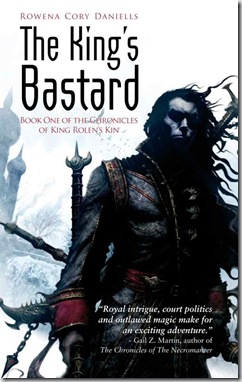 The King's Bastard is the first book in the King Rolen’s King Trilogy by Rowena Cory Daniels.

I was immediately attracted to the cover of this book by the art of Clint Langley before I even knew of Rowena.  So using an artist who is so widely known in geek subculture certainly paid off in this instance.

The Tale begins :
The Kingdom of Rolencia slumbers through a 30 year peace. The King’s heir, the older of two twins readies himself for a marriage that will cement a further time of prosperity. The Spar Warlords come to pledge their loyalty once again, peace will reign under King Rolen’s Kin or so the story begins.  What the reader receives is roller caster ride of action and drama as Rolencia is beset by powerful and devious enemies and the royal family attacked from within.

Why King’s Bastard had me biting my shield and frothing at the mouth:
It’s not often that I sit down and read an entire trilogy in a week, but The King's Bastard was the start of a glorious week of reading, that still left me wanting more.  It’s quite possible that if the next trilogy had been written I would have devoured it as well.

The pacing in The King’s Bastard is superb, the only thing that I can compare it is Barry Eisler’s military/thriller novels. I’d like an afternoon to sit down with Daniells and talk about how she structured the novel to achieve this, as she deftly weaves a number of plot lines together and seems to be an excellent judge on when to leave the reader hanging.

Daniells has been criticised for her inclusion of a gay supporting character. I found her  handling of the character Orrade to be well done.  He is fully fleshed out, he’s not window dressing or some hat-tip to liberal sentiment, but a fully realised character whose sexuality and choices impact characters, circumstances and story in a believable way.

Like Sands through the hourglass
The series has also oddly been labelled as fantasy soap opera.  I can’t agree with that – if we want to look at the structure, the cyclical nature of soaps, a broad cast of important characters,  then Martin’s  A Song of Ice and Fire series presents a much more convincing case for that label.  Perhaps this label is a symptom of bias (ie women write soap, men write pseudo-historical drama)? Comparing the King Role’s Kin series with A Song of Ice and Fire the former is a tight, punchy entertaining read while the later to quote a friend comes perilously close to,  “The Young and The Restless meets Lord of the Rings, in slow motion”.

With high fantasy it’s dreadfully easy to imitate those who have gone before.  With The King's Bastard I found enough original world building to give me a fresh read  - no elves, an interesting take on magic (that has direct impact on character, and plot), and geology and geography that make sense.
In hindsight the only thing that niggled at me was that the size of the world felt too small for the action taking part in it.  I feel that their needs to be other continents and other civilisations.

What are you doing still reading this review?
If you are looking for a fresh entertaining fantasy read,I’d recommend The King's Bastard without reservation.  Indeed the whole trilogy is value for money - fast paced, high action fantasy
I’d also check out the review by Rob Will for an in depth analysis.

Rowena Cory Daniells was also kind enough to consent to an interview on authors and social media here.
Did you enjoy this review? Would you like to read more? You can subscribe to the blog through a reader or Follow me on twitter.