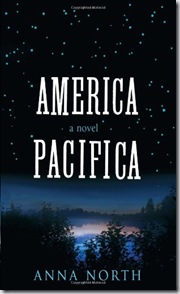 Dystopia with a capital D
America Pacifica is bleak.  Now you may well say, “Come on Sean, it is a dystopian novel, it’s not supposed to be sunshine and roses” but to some of you who may have picked up Bacigalupi’s Shipbreaker (which to be fair is YA) and found it to be a nice adventure story with a ‘dystopian light’ background, America Pacifica might come as a bit of a shock.

Here’s what the reader is hit with on page 5:

‘The bathroom hadn’t been cleaned in weeks; old human smells lay thickly one on top of the other, piss and shit  and menstrual blood and paper towels so sodden with these things that they became almost human themselves.’

It’s certainly not all dried bodily fluids, but North paints a rather gutsy, visceral image.

The Synopsis
Eighteen-year-old Darcy lives on the island of America Pacifica—one of the last places on earth that is still habitable, after North America has succumbed to a second ice age. Education, food, and basic means of survival are the province of a chosen few, while the majority of the island residents must struggle to stay alive. The rich live in "Manhattanville" mansions made from the last pieces of wood and stone, while the poor cower in the shantytown slums of "Hell City" and "Little Los Angeles," places built out of heaped up trash that is slowly crumbling into the sea. The island is ruled by a mysterious dictator named Tyson, whose regime is plagued by charges of corruption and conspiracy.
But to Darcy, America Pacifica is simply home—the only one she's ever known. In spite of their poverty she lives contentedly with her mother, who works as a pearl diver. It's only when her mother doesn't come home one night that Darcy begins to learn about her past as a former "Mainlander," and her mother's role in the flight from frozen California to America Pacifica. Darcy embarks on a quest to find her mother, navigating the dark underbelly of the island, learning along the way the disturbing truth of Pacifica's early history, the far-reaching influence of its egomaniacal leader, and the possible plot to murder some of the island's first inhabitants—including her mother.

The Writing
The writing tends to be dense and vivid – America Pacifica should really leave you in no doubt of the poverty and deprivation that some on the island survive in.

I couldn’t help but think that while America Pacifica might deliver an experience of the future that will want to make you take a shower- it should be noted that there's not much contained within these pages that is not experienced now by a majority in developing countries and by a growing minority in the west.

‘I’m tired of plots that value individualism and egotism above all else; of heroes that always have to be the masters of their own fates, to be active and not take anything that life deals at them lying down (whereas most of the time, we lie down, we accept, we deal with what we have been given)’.

I think de Bodard would appreciate North’s America Pacifica. Darcy is not the archetypal American all conquering hero.  She’s a survivor, she has to do things and face obstacles that heroes don’t usually.  She’s sexually assaulted twice in the novel, first at the hands of a guard she goes to to report her missing mother to and second by an overbearing, and originally helpful ally.  Both these instances and her reaction to them strike me as very real.  She survives not by “kicking the guy in the balls” but by detaching herself, by walling off a part of herself- by effectively “accepting” and “dealing with it”.  It’s a raw but painfully real depiction of character.

The message, if the novel has one, is a call for humility and acceptance - that the past is gone and we need to change, lest we repeat our mistakes.

The reader is presented with two possible paths; the first a recreated microcosm of old America (our present one). There are  huge disparities between rich and poor, a clinging to the past, to fossil fuels, and luxuries. There’s even an ecological disaster gnawing at the edges of the island, as the solvents used to power this society cause the land to decay and slip back into the ocean.

The second path, less explored than hinted at, is that advocated by Daniel an almost mythical teacher who refused to travel to the island.  We find out that he began learning to adapt to the cold, to survive in the new ice age.  The book ends with Darcy setting off to find the mainland, and people who she thinks have followed Daniels example.

The book works as a critique of consumer society broadly and America specifically.

Not preachy
Despite the picture North has painted for us, I didn’t feel as though the authors voice was intruding on the story. This is due to the focus never really shifting from Darcy.  The dictator is overthrown in the end with the help of Darcy’s allies, but its almost a in the background.  The importance is placed on Darcy seeking out Daniel and discovering more about her past.

What I liked?
I appreciated the realism, and the shift of focus away from the overthrow of the dictator and society. That there was more fundamentally wrong with America Pacifica than simply one man.  That it was, essentially, a society that was unsustainable.

What I didn’t?
There’s nothing that gives me cause for complaint.  It’s honest dystopian fiction and that might not sit comfortably with readers who are not willing to examine the implications of what North is hinting at.  The realism, might be off putting for those that have lived a sheltered existence. The sexual assaults while certainly not graphic might well be triggering.

Read this book if you like intelligent dystopian fiction.  It sits comfortably in that grey area between genre fiction and literature.

This book was a review copy provided by the publisher
Did you enjoy this review? Would you like to read more? You can subscribe to the blog through a reader,by Email or Follow me on twitter.
Posted by Sean Wright at 12:48 PM