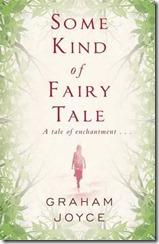 I have been saving Some Kind of Fairy Tale to read for about two years, always putting it off to read review copy.

I knew within the first few pages that it was going to be one of those rare books that performs the magic of immersion and so delayed reading until I needed a really good read to pick me up.

In that intervening period Graham Joyce passed away.  So my joy at reading this work was tinged with the sad knowledge that there’s no more of his work to be enjoyed, that we have lost an astounding talent.

It is Christmas afternoon and Peter Martin gets an unexpected phonecall from his parents, asking him to come round. It pulls him away from his wife and children and into a bewildering mystery.

He arrives at his parents' house and discovers that they have a visitor. His sister Tara. Not so unusual you might think, this is Christmas after all, a time when families get together. But twenty years ago Tara took a walk into the woods and never came back and as the years have gone by with no word from her the family have, unspoken, assumed that she was dead. Now she's back, tired, dirty, dishevelled, but happy and full of stories about twenty years spent travelling the world, an epic odyssey taken on a whim.

But her stories don't quite hang together and once she has cleaned herself up and got some sleep it becomes apparent that the intervening years have been very kind to Tara. She really does look no different from the young women who walked out the door twenty years ago. Peter's parents are just delighted to have their little girl back, but Peter and his best friend Richie, Tara's one time boyfriend, are not so sure. Tara seems happy enough but there is something about her. A haunted, otherworldly quality. Some would say it's as if she's off with the fairies. And as the months go by Peter begins to suspect that the woods around their homes are not finished with Tara and his family.

Much of the success is achieved I think from what looks like effortless, straightforward writing and a subtle approach to presenting the fantastical elements. Some Kind of Fairy Tale could easily have been written as an urban fantasy where the acceptance of fantastical, or the reality of another world/dimension is taken for granted in the reader.  To me though that turns the story into some form of superpower/action story.

I actually felt Some Kind of Fairy Tale dragging my experience of the text the other way.  I’m well versed in common fantasy tropes so I find it easy to suspend disbelief when it comes to fairies, fae, etc. But Some Kind of Fairy Tale puts you in that borderland where, at least for a time you are unsure of where the story is going to go.  Has Tara, missing presumed dead for 20 years, really been “away with the fairies”  or is she suffering some trauma and supressing the memories?

I also suspect that its the focus on the relationships and reactions of Tara’s return that makes this more magical realism than urban fantasy. The tale or plot is less important than the examination of character.

Some Kind of Fairy Tale is fantastical literature and enchanting read in all senses of the word.