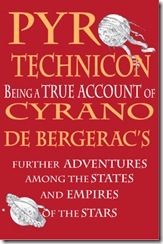 As the extended subtitle informs the reader, it’s the further adventurers of Cyrano de Bergerac.

Why does that name sound familiar?  Perhaps you have stumbled upon the the performance of Gérard Depardieu in the 1990 film version of the play based on Cyrano’s life, or indeed the 2008 stage play featuring Kevin Kline. These dear readers are about the historical figure.

Browne’s work harks back to the writings of the man himself. A freethinker, and rationalist most relevant to speculative fiction readers for his works, The Other World: or the States and Empires of the Moon and The States and Empires of the Sun published toward the end of the seventeenth century.  They were  forerunners of what came to be science fiction and formed part of the literature that fed writers such as Swift and Poe.

The style, true to the works of Cyrano, therefore, is one that is a little more verbose than many readers would be accustomed to.  To give you an inkling:

My nose surfaced first, rising from slow waves of sleep, from darkness into darkness.

The hour was early. My feet were cold.

I heard a baker’s horse clopping through the Toulouse streets, and a costermonger’s soft singing as he prepared his stall. Then a ragged clatter of footsteps, and the laughter and drunken shouts of revellers leaving a tavern after a long night. I heard one of them spewing into the gutter, and by the grunts forced out of him as he heaved — the shapes of them, as it were, the grunted consonants, the bowely vowels — I knew the fellow for a Gascon.

It is not then a book which one runs through at breakneck pace.  No. One must stroll through the language, appreciate the artistry, the wit and the absurdity. It is a book in which the tale matters less than the manner of its telling.  One might even venture to call it art, if one does not care about being considered pretentious.

For those who must know, who cling to plot like a drowning rat; it is the story of the rescue of Cyrano’s love Roxanne from the sinister billiard table attired Master of Secrets. Do you need to know more?

My ePub version was illustrated, featuring works inked by Brown himself, which only add to its verisimilitude as a text from a bygone era.

Lovers of Baron Munchausen, Terry Gilliam movies in general and French wine will enjoy this book. It is also one that I think demands rereading, that may improve with further tasting.