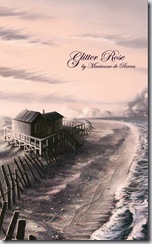 Glitter Rose by Marianne de Pierres, is the first (and only, so far) hardcover published by Twelfth Planet Press. It’s also a limited edition run with each of the copies signed by Marianne.

The collection features five short stories – four previously published and one written specifically for this collection.

Four of the stories are set against the background of a near future Australia, on Carmine Island.  A former popular resort island, its inhabitants include the locals – a mix of mainland castaways looking for a quieter life, the island’s aboriginal population and the “indolent rich” who provide a tourist lifeline.  Carmine island’s latest colonisers, the spores, have drifted in from the deep ocean, they bring allergies and in severe cases, alterations to the inhabitants.

Glitter Rose is  Tinashi’s story. She's on the run from her life, drifting back to a place that once offered comfort, seeking it out again in the hope that she can heal what is troubling her.  The opening story, Glimmer by Dark, has a broad appeal then to any reader who has likewise moved away and then returned to a place seeking to recapture a past.  It also delicately draws the reader into the inner life of the island, as Tinashi is befriended by locals, snared in their the web of odd relationships. Lest you think this is some whimsical drama, Glimmer has a surprising and dark ending.

Moonlight at the Ritz directs our attention to the pleasure seeking “indolent young rich”.  Tinashi has settled in, a member of the Carmine Island Tourism auxiliary. There’s death, 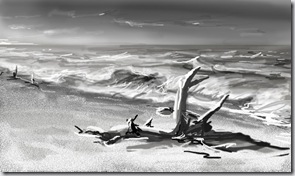 sacrilege and neither the reader nor Tinashi is sure how much of what happens is reality or a spore altered dream.

The Flag Game centres on a competition the locals run, the official prize being a parcel of land -unofficially though its believed by the locals that the spores grant their own prize .  We find out what Tinashi is running from and the extent of the power the spores can exert.

Mama Ailon, nicely concludes the set.  Tinashi seeks redemption and  we come to understand the indigenous view of the spores and the island.

It can be hard to place Glitter Rose, it’s not a book that fits easily into genre categories, and while its pink (or is that Rose) cover might put off those men that have rather strict concepts of masculinity,  this collection is not wistful women and pink fairy dust.  There’s a dark edge to Glitter Rose and in that sense its perhaps iconically Australian – depicting a beautiful landscape with dangerous fauna & flora lying in wait.

Marianne’s writing is fluid, evocative and heart achingly lyrical - the sort of ritten ork you can just read aloud for the enjoyment of it.  Carmine might be based on Stradbroke island but de Pierres’ artful descriptions could be of any one of the small coastal communities of Australia yet to feel the full brunt of development or that have seen their heyday.  Perhaps this is what makes the stories, the characters, seem so genuinely real.

In the Book Shadow is the odd story out in this collection, but it’s a lovely quirky and slightly sinister tale of a Bookshop many of us would recognise. Indeed the bookstore that inspired it, Pulp Fiction, I have actually been to so the feeling “I know this place” that I had while reading was fully justified.

Credit where it’s due 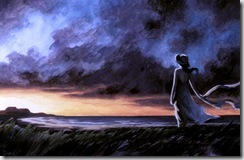 Twelfth Planet have done an excellent job on the production of Glitter Rose, this pint sized (it’s about A5 size) packet of pink compliments de Pierres’ words perfectly.  The internal illustrations both colour and black and white simply amplify the experience.

At $35 dollars, for a limited edition signed print run, this book is a must have for fans of Marianne – it’s the only place I believe where you will find all the Carmine Island stories together.

I think it’s also an excellent “Slipstream” or “Gateway” collection to give as a gift to young teens (or indeed adults) perhaps growing out of their Edward and Bella stage.  It’s a little bit Sci-fi, unselfconsciously Australian and a little bit Fantasy.  If de Pierres wasn’t a well known Sci-fi writer I’d hazard a guess it would be considered magic realism.

In these times of ebooks and electronic readers Glitter Rose takes full advantage of everything a book can be.

Note:  This was a review copy provided to me by Twelfth Planet Press