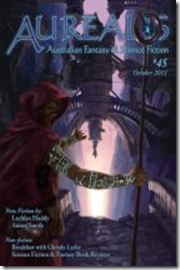 Aurealis (ori-aahliss) or as I incorrectly pronounced it for most of my life or-reelis is Australia's most successful speculative fiction magazine. Issue 1 was released in late 1990 and was intended as a professional mass market magazine.

Prior to this Australian speculative fiction readers and writers had to survive on international magazines.

So some 20 years later and Aurealis is changing both format and regularity.  From memory it used to be a quarterly, it’s now moving to a monthly publication and it will be offered for purchase on Smashwords in multiple formats.

Dirk Strasser who along with Stephen Higgins started the Magazine back in 1990 returns as editor of this first digital issue stating in his editorial that:

We believe a publication devoted to fantasy and science fiction should be at the forefront of change. So here we are. Right on the edge. Helping create a new type of speculative fiction magazine.

I have viewed the epub version via the Calibre software and on the old workhorse - my Sony PRS 505.  The calibre book viewer renders it very well, there’s no formatting errors that I can see and being connected to the internet the embedded video reviews show up beautifully and are a nice bonus feature.

On the PRS I was sure that there would be an issue with the video links displaying(the PRS does not do internet connectivity) but I was surprised to see that the jpg’s render just like they do on computer screen(though I obviously can’t play them).

It seems to me to be a very good launch, embedded video and audio links will obviously favour those devices that have internet connectivity (like iPads and tablet readers) but for the one of two reviews that future editions might contain It wouldn’t both me to view it first on Calibre before I load it on the reader.

Enough of the specs…what are we getting?

Well as they are moving to a monthly schedule there’s about half the content of the old mag (going purely on page count of issue 37) which when you think about it actually results in more content over a three month period.

In this issue we have:

And to my surprise my interview with Kelley Armstrong is included as a link in Carissa’s weblog.

Well I haven’t had time to read the fiction yet, but my initial thoughts are positive.  I like the step towards digitisation and I like the move toward a quicker turnaround, and monthly issues.  I like it enough to even consider becoming a regular subscriber.

Do yourself a favour and download it it’s free

Edit:  I have it on good authority that the next 10 issues will be free and thence forward it will be $1.99.